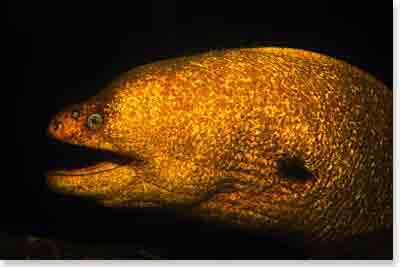 The moray is found from Point Conception to Southern Baja California in rocky reef areas. Growing up to 5 feet in length and possessing three rows of razor sharp teeth, the moray is a formidable sight peering out from a rocky outcropping. Despite what you may have heard, the moray is actually quite shy and will almost always retreat if given a chance. Divers have been bit while blindly sticking their hands down holes looking for abalone and lobster. The moray hunts by smell and has very poor eyesight. Its favorite prey include octopus, crabs and small fish. They lack pectoral fins and a gill covering (operculum) present in other eels. They are often mistaken for being aggressive because of their constant opening and closing of their mouths. The moray is actually just doing what is has to in order to breathe. By opening and closing their mouth they are able to force water over their gills, enabling them to breathe.  Photo courtesy of Tom Haight.