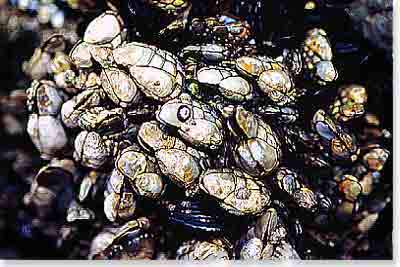 So called because of its resemblance to a goose’s neck and head. In medieval times they were named goose barnacles by “naturalists” who believed geese hatched from them. The gooseneck barnacle forms dense colonies in crevices on rocky shores with strong waves. Barnacles anchor themselves to rocks by a tough, flexible stalk (peduncle), which also contains the ovaries. This is actually their “head” end. Once the gooseneck barnacle has attached itself to an object, it secretes a series of pale plates at the end of its stalk, forming a shell around its featherlike legs, which comb through the water for food. The legs face away from the sea, enabling the barnacle to feed by filtering out particles of detritus from returning tidal water as it funnels past them through cracks in the rocks.  The larger goosenecks found in the northern California waters have become a taste delight in some San Francisco restaurants.