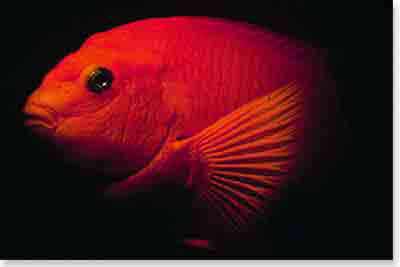 The Garibaldi is the official California State Marine Fish. Its bright orange coloration leaves little doubt when you catch a glimpse of it. Once hunted to alarmingly low numbers, this species has rebounded and then some, often becoming a pest while diving. Its juveniles bear electric blue spots to keep the highly territorial adults from constantly harassing them. They can be found in rocky areas from the intertidal zone to as deep as 100 feet and grow to about 14 inches. Garibaldi feed on bottom-dwelling invertebrates such as bryozoans, worms, shrimps, crabs and sponges. The Garibaldi is not afraid of much and has been known to even nip at divers if they enter its space during the spring mating season.  Photo courtesy of Tom Haight.